Costumes are optional, but encouraged, because “it’s a Jungle in Here” on stage at The Grand!

This fun and “Jungle” casual event starts with an open bar and browsing through our fantastic silent auction items. Plenty of tables are available for those who want to visit with friends, enjoy the buffet dinner of land and sea delicacies provided by Galveston Restaurant Group, or take a break between bids.

This year’s event will include a “Pick-n-Peel Banana” prize game. Guests buy a ticket and select their banana to peel for a surprise gift (prize values have a broad price range and include a variety of items and experiences).

Also included will be our famous Jungle Elixir (Wine) Pull. Silent auction items will consist of an Astros Suite Package for 10, a private cooking class for eight at The Kitchen Chick in Galveston, and much, much more! Funds raised support the Serious Fun children’s series and other educational programs at The Grand 1894 Opera House.

“On a personal note this is very important to us at GRG”, says Johnny Smecca. What began as a real dream that Danny Hart had one night before the opening of The Saltwater Grill, has turned out to be a reality for the last 20 years. The dream of children painting plates for Saltwater Grill’s beautiful desserts and the profits going to children’s programming at The Grand. “It’s the greatest partnership with the community that we have, What could be better than partnering with an amazing treasure on our island like The Grand and supporting children,” said Johnny Smecca. The event is closing in on $200,000 raised. Get your ticket and come have some serious fun! 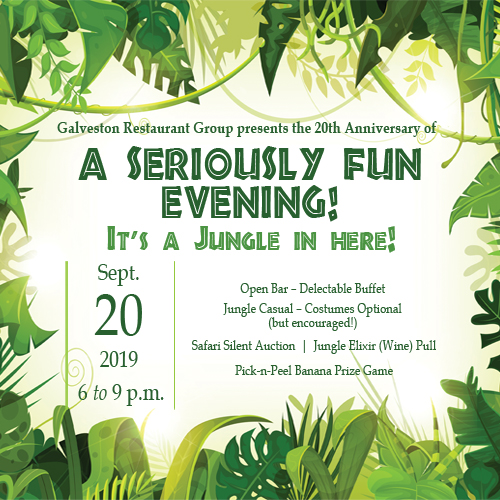